As I got in from work today, I sat down and flicked through Sky Movies and ended up watching Drillbit Taylor. I enjoyed it more than I thought I would - the child actors were actually quite funny and I normally find Owen Wilson chuckle-worthy. I'm also still amazed at how slim Josh Peck is.

Anyway, it's pretty predictable stuff but it provided me with some enjoyment.

I was gonna make a thread like this, dammit Suede

I just watched The Machinist. A surreal thriller starring Christian Bale, who's disturbingly skinny! I really enjoyed the film a lot, and it creeped me out several times. Recommended!

40 year old Virgin - I enjoyed this tbh. Some bits were hilarious and it regularly made me laugh which is more than I can say for most recent comedies.

One of the weirdest films I've seen in a while, but I understand how it managed to get such a large cult following. Just thinking of Napoleon's vacant slack-jawed stare makes me chortle.

You watched it in 15 minutes?

A delightful and fun filled romp through time, this Weeble recommended comedy actually made me laugh. And smile. Damn!

How can you watch films so quickly!? lol

Well, let's put it this way. Everyone in my class was parodied in some way or another at the end of the year, and this is what my result was: 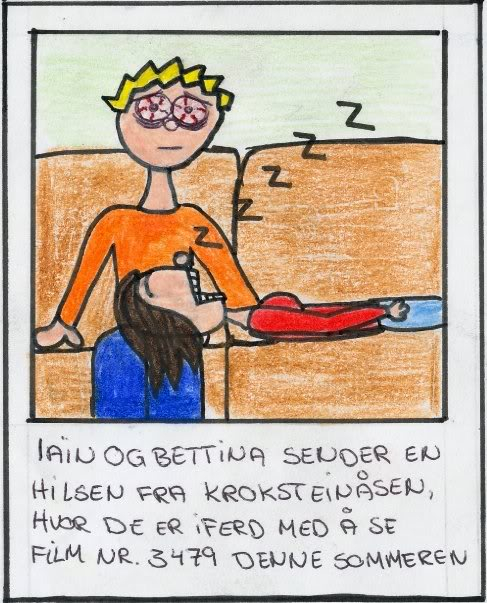 Does that explain it?

A very strange gothic drama film starring Clint Eastwood. Set during the American civil war, Clint plays a wounded yankee taken in by a southern girls school. What unfolds is, well. Watch it if you will. Don't expect another Dirty Harry, that's for sure!

That picture is great lol. I get it now lol

Lacks the charm and wit of spiritual predecessor (read: cynical marketing), but still a down to earth, occasionally hilarious and very human picture.

A delightful and fun filled romp through time, this Weeble recommended comedy actually made me laugh. And smile. Damn!

Now you need Bill and Teds Bogus Journey and the job is done.

I dont think its quite as good as Exellent but still worth a watch.

T. Gilliam's renowned Sci-fi is as disturbing as it is funny. Nothing like the brilliant 12 Monkeys, the tone of this film is distinctly different. Claustrophobic at times. The bureaucracy threatens to engulf the viewer and you can feel the insanity peeling off the walls. A classic, no doubt, and definitely worth watching for any fan of futuristic dystopias.

Its one of those films that without Al Pacino's acting skills and his now legendary Pre-game speech would just have been one of those poor sporting movies. Don't get me wrong it is a bad sporting movie. But Pacino's skill and that speech add a shiny gloss to it.

Funny in a way I've never seen before. Not a comedy like Anchorman; in that it doesn't straight up play for laughs, but neither is it like Reservoir Dogs; as comedy is definitely a priority.
It's nevertheless hilarious. George Clooney taking a sledgehammer to a large sex toy is the best 5 seconds of film there is.

I love the part when Pitt meets with Malkovich and he glares at him in a "I'm a badass crook" manner. And when Clooney spots Pitt in the closet and that which follows? Priceless.

BaR is great. I didn't expect that Brad thing to happen halfway through and I didn't really laugh that much throughout the film although there were a few LOL's scattered around but at the end where he's basically speaking the audiences mind is hilarious. All the pentagon bits where he reports how things have progressed and he just goes WTF along with us had my sides splitting. I laughed throughout the entirety of the credit. It was like a 90 minute set up to a fucking good joke.

Kaptain Kaviar wrote:I love the part when Pitt meets with Malkovich and he glares at him in a "I'm a badass crook" manner. And when Clooney spots Pitt in the closet and that which follows? Priceless.

Its Malkovich's reaction when he learns the Russian have his memoirs. "The Russians? The fucking Russians?"

A brilliant and insightful documentary. The whole 90 minutes comprise of Tyson in the present day talking us through his life accompanied by archive footage and photography. It's more about the psychology and character of Tyson than anything else and he's admirably honest and critical about himself and the things he's done and he's led an amazing rollercoaster life. The pacing is good and kept me entertained from start to finish and some of the parts where he commentates on footage of his fights, telling us his thoughts and feelings as we watch him on screen are phenomenal. Some people criticize how biassed it is but the film is called Tyson and consists of Tyson talking about Tyson. Remember to take what he says as subjective and enjoy.

Harry Potter and the Half Blood Prine- 4/5

I am glad. I haven't seen it yet, but when the new Harry Potter is deserving of 4 out of 5, all is right with the world.

Completely debatable of course... im a fan of the books, and im an increasing fan of the films. Great ensemble cast, even the main trio are getting better, rupert Grint (Ron) is genuinely brilliant. Aaand of course Michael Gambon camping it to the mak, Alan Rickman being all kinds of brilliant and Helena Bonham carter being the sexiest evil with in the history f the world. Emma Watson is also fit now. SFX were incredible, colour and art direction was superb, (particularly the opening sequence!) So yeah, was good.

ah good, least i know there is a chance i will enjoy this, the third still stands out as my favourite.